I can’t believe it’s coming up to my first anniversary of being married! Time really does fly and so much has happened since last year. I’ve been wanting to reminisce about the wedding and our honeymoon in Mexico for a while, so I thought it would be nice to show you what we got up to on our honeymoon in Mexico and what we enjoyed/didn’t enjoy about the whole experience – sort of a travel advise/top places to visit kind of post! 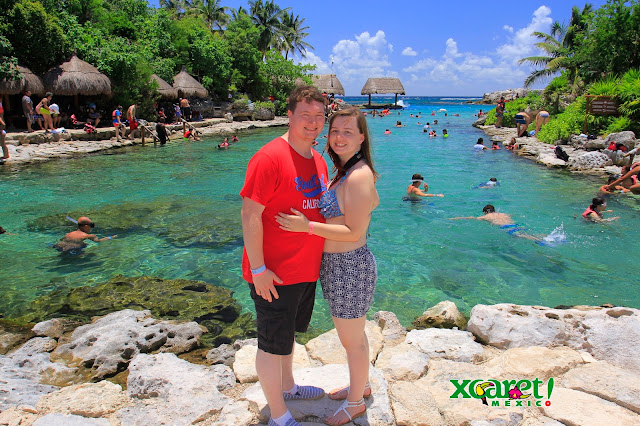 We stayed at a hotel in Riviera Maya which is on the East side of Mexico on the Yucatan Peninsula. I had never been anywhere like Mexico so I was excited but also quite nervous being around a completely different culture to what I’m used to.

Cancuns airport was pretty intense. The first thing that hit me was the heat – my gosh it was hot! I’ve never been somewhere so hot before so it was quite a struggle to start off with. After walking around the airport for a bit and getting little pockets of air conditioning I soon adjusted to the heat difference. There was a lot of people and lots of tourists in the airport – which was to be expected really. It did make it quite difficult to find where we were meant to be meeting our crew and coach, but we did eventually find where we were meant to go.
Our hotel was beautiful! We stayed in the Grand Sirenis Riviera Maya which was about an hour to get to from the airport. The hotel complex is absolutely huge and has 10 restaurants so we were spoilt for choice! We had a beautiful sea view room and let’s just say we settled in very quickly! 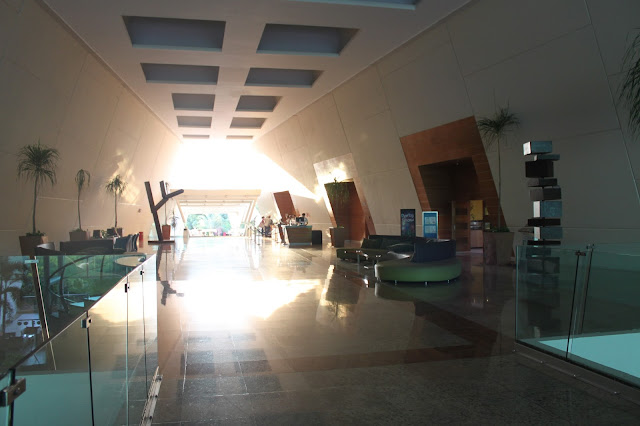 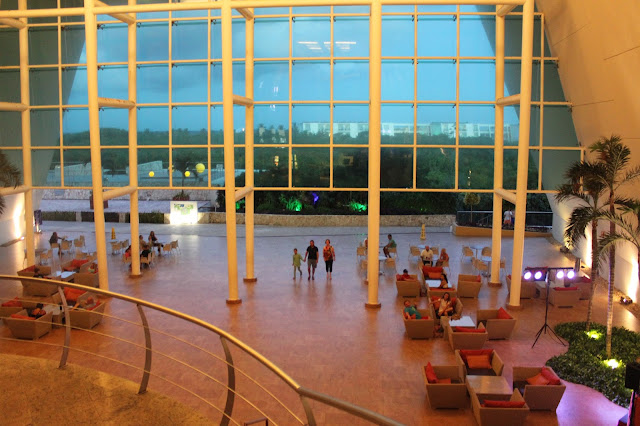 First Lobby Exit (Literally standing in the same position as the previous photo, but I just turned around. The lobby was huge, and this is only one of them!) 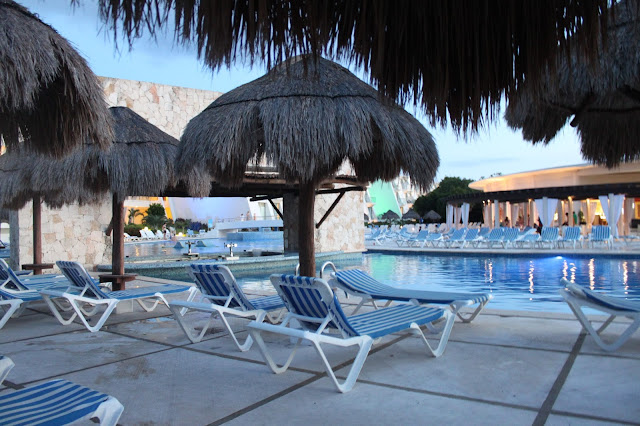 Our favourite swimming pool of the complex (There are 3 pools and a lazy river – it was perfect!) 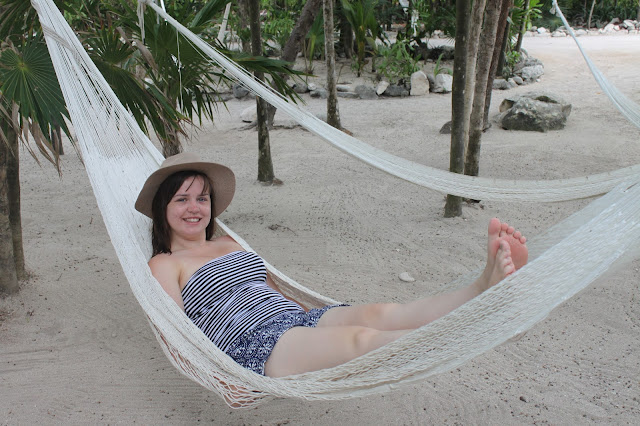 Just had to squeeze in a photo of me in a hammock!
We had a few excursions booked whilst we were there. The first excursion we went on was to an Eco-archaeological park called Xcaret. This place was amazing, it’s part zoo part water activity park where you could swim through an underground river, swim with sharks and dolphins and just enjoy the scenery! I was too scared to swim with the Sharks and Dolphins (Yeah, you heard right, I’m too scared to swim with Dolphins….) but we were desperate to swim in the underground cave. It was absolutely freezing but so worth it (Apparently the water temperature was 27 degrees Celsius, but trust me, it did not feel that warm!!). 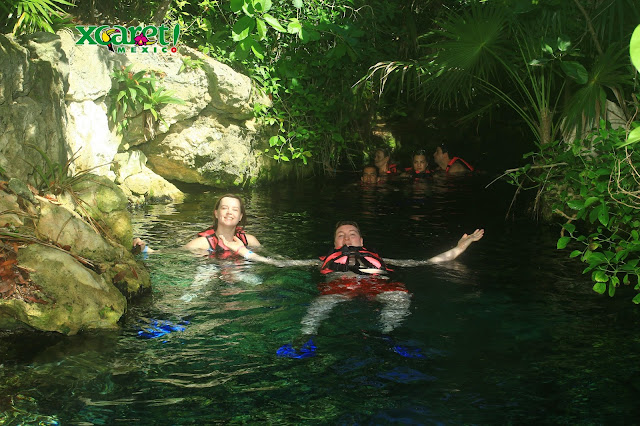 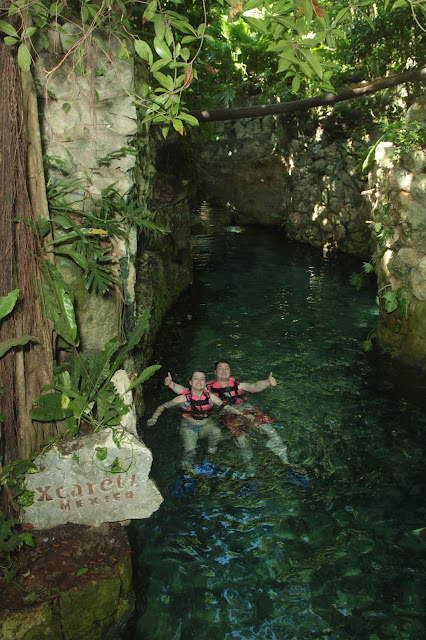 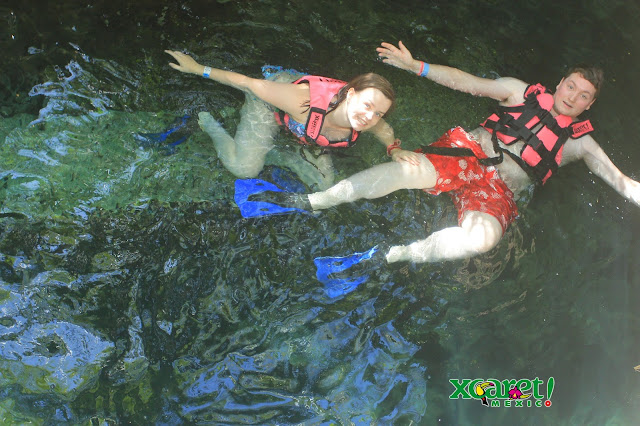 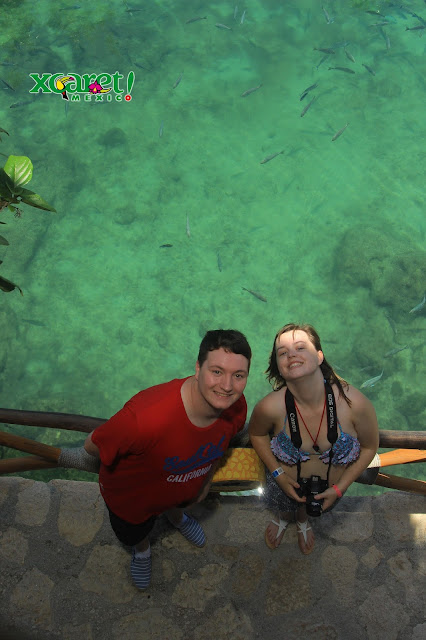 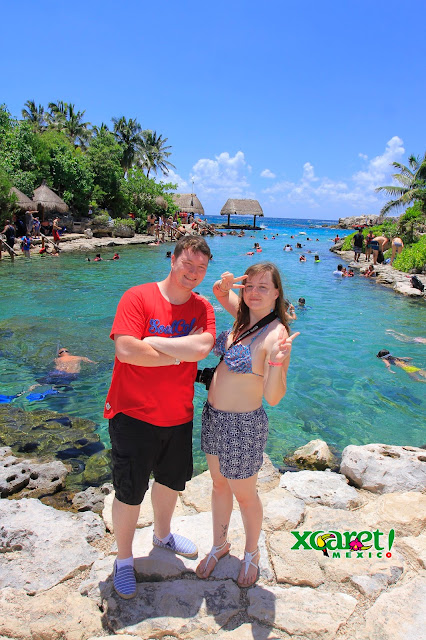 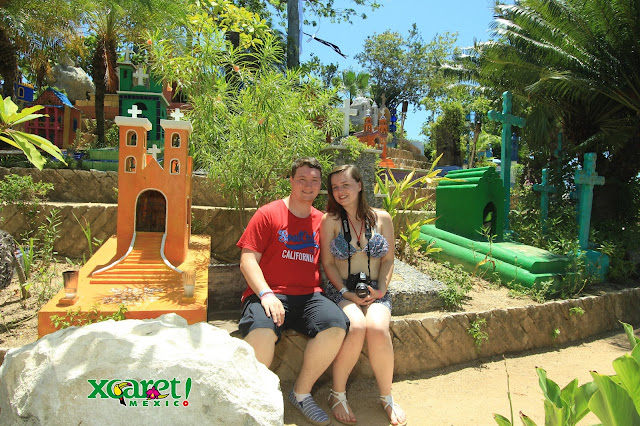 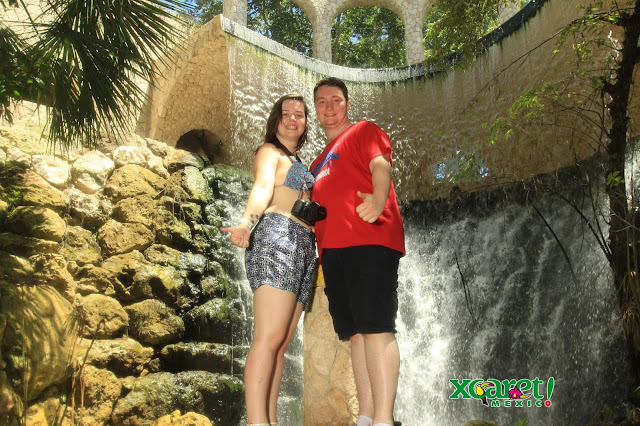 My husband and I already have plans to go back to Mexico and Xcaret one day as we loved it so much. If you’re going away to Riviera Maya I’d highly recommend Xcaret. Swimming in the underground cave was definitely my favourite part of the day.
The next excursion we went on was to visit Chichen Itza, the famous Mayan Pyramid/City. On this excursion we also got to visit a Tequila factory and a traditional Mayan village. We thought this trip was excellent! It involved drinking a lot of Tequila (YES!) and we had some pretty awesome tour guides. 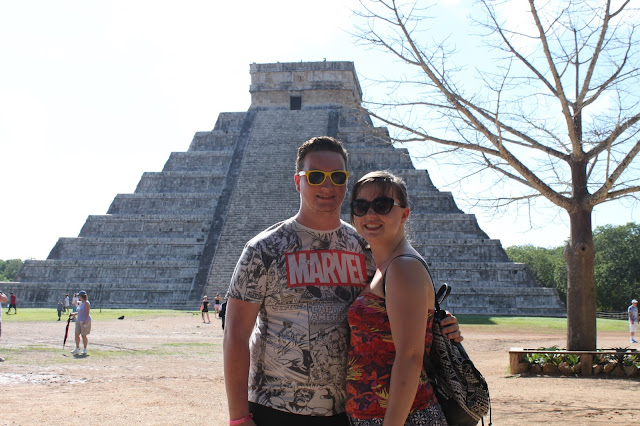 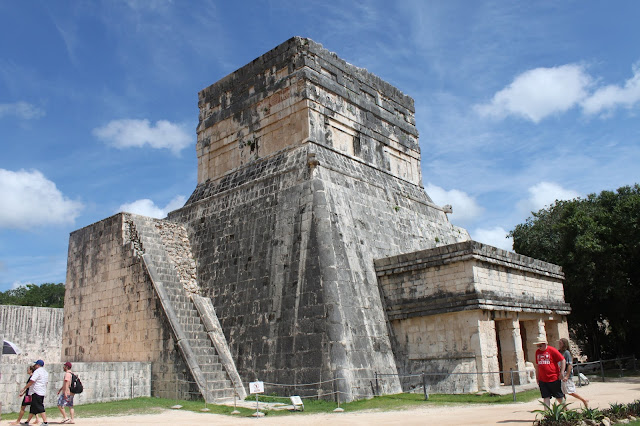 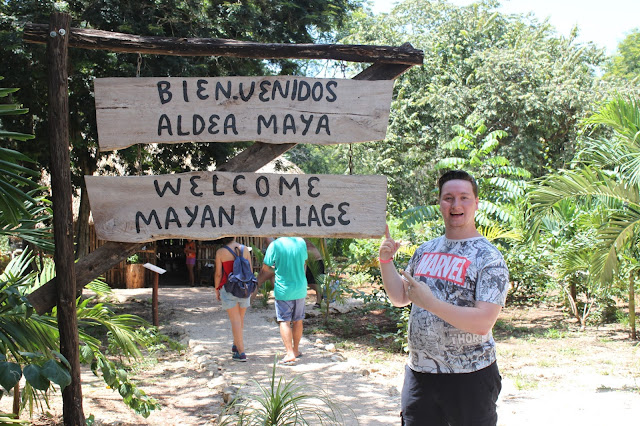 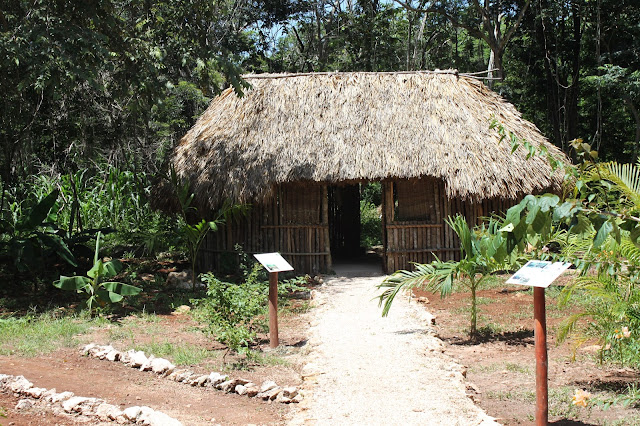 It was pretty darn hot this day so we had to spend as much time as we could under the shade and drinking lots of water, but it didn’t spoil the excursion one bit. It was amazing to see how some Mayans still live and it was a real culture shock. We did, of course, leave the Tequila factory with a few bottles of flavoured Tequila to take home!!
Our next excursion was to visit Contoy Island, an island just off the coast of Cancun. This island is absolutely beautiful. Only a few people live on the island so it was filled with natural beauty. Unfortunately this excursion was pretty busy. A lot of boats arrived at the same time so the beach area was FULL of tourists. We felt the island wasn’t big enough to hold so many people comfortably so it was hard to get a good spot on the beach without having lots of people sitting in front of you. Luckily we turned up an hour before anyone else so that gave us time to quickly get some nice photos. 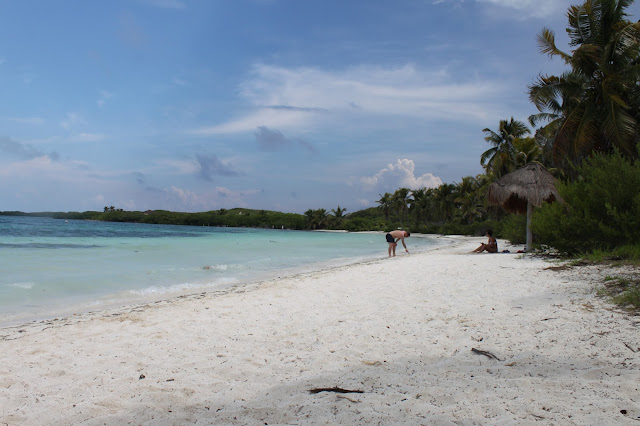 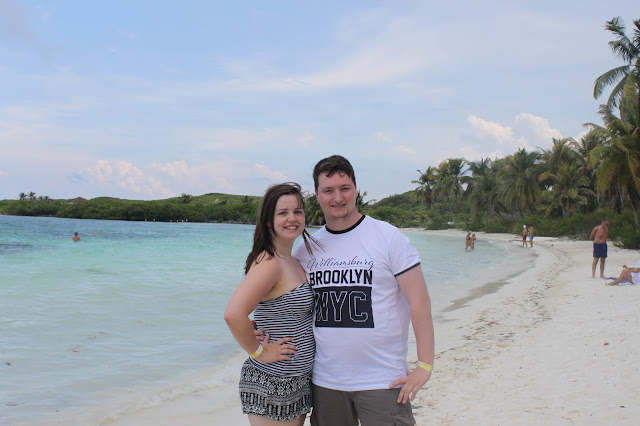 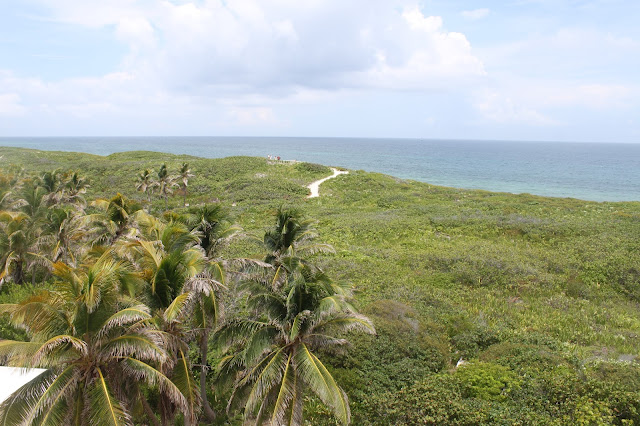 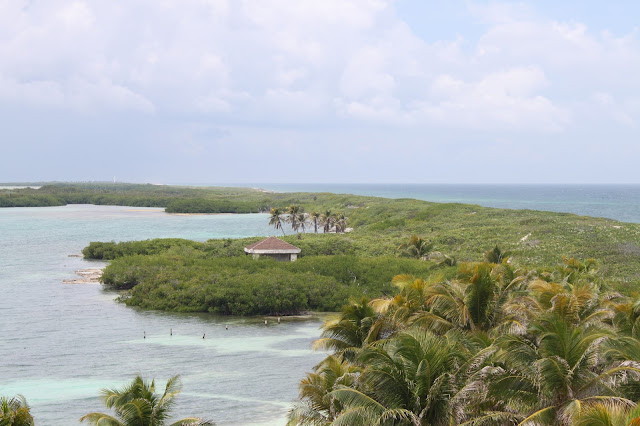 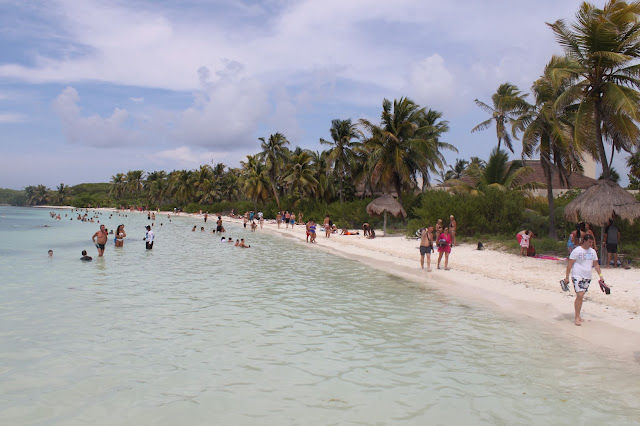 As you can see the beach was starting to get quite busy…
As much as we were quite disappointed that the island got full pretty quickly, I’m really glad we visited as the island was stunning. I probably wouldn’t choose to go again purely because of how busy it got, and also because I got pretty darn sea sick on the speed boat! (Never in my life have I ever been sea sick, but this boat ride was through a storm so it was pretty choppy!)
Our last excursion was to Tulum, the ruins of a Mayan city. I have no photos of this unfortunately as I decided not to take my camera (I’m such a doughnut!) but it was amazing to see all of the ruins. After visiting Tulum we then went to a Jungle Adventure park where we zip-lined over the jungle and snorkeled in a Cenote (an underground lake). Luckily they took some photos of us so we bought these as we enjoyed ourselves so much! 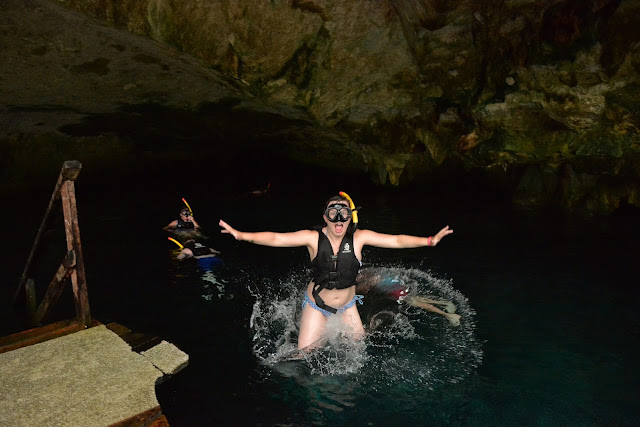 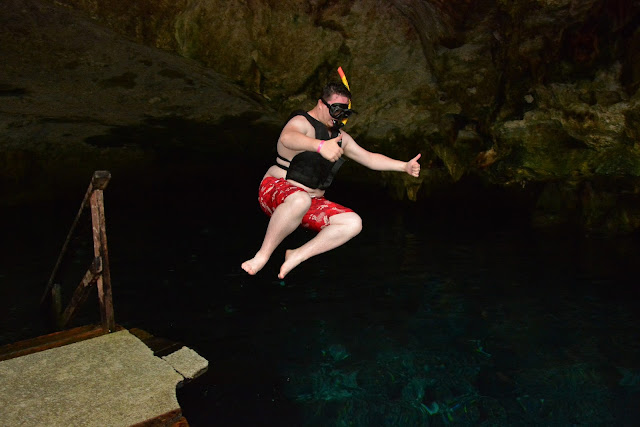 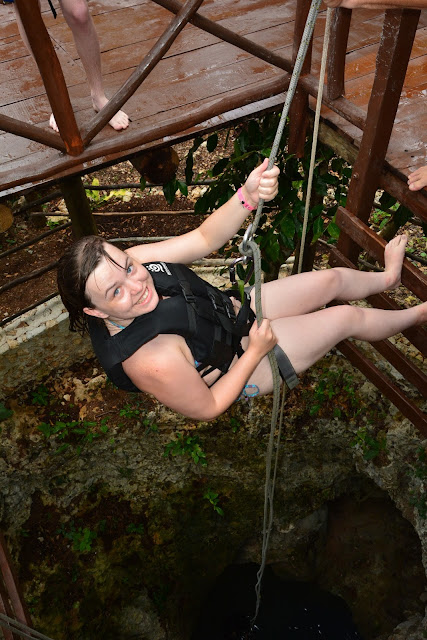 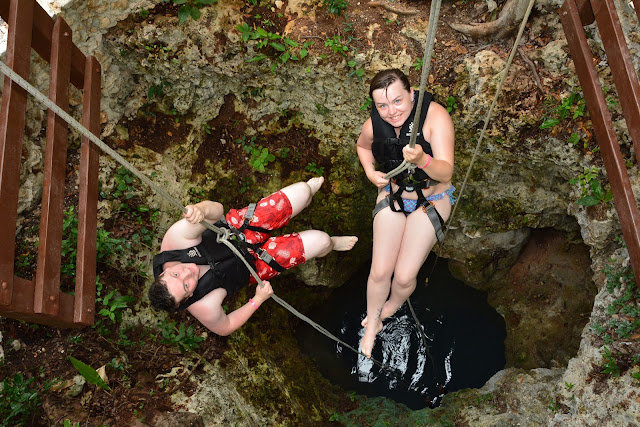 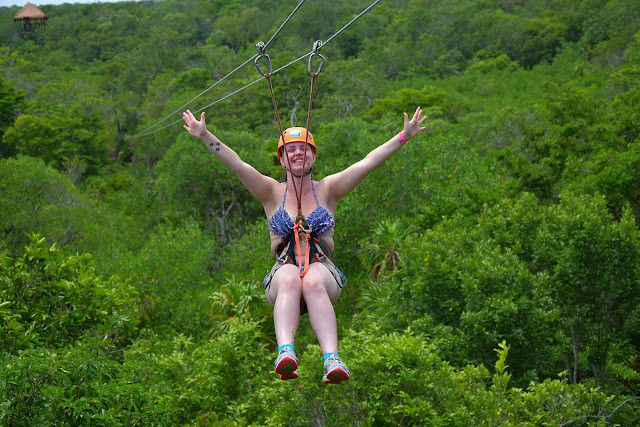 Not going to lie, I was sh*ting myself when it came to the zip-lining! But I’m so glad I didn’t bottle it as it was literally amazing. We even zip-lined into a Cenote, which if it works, I can try and post a video below. The force of the water pulled my bikini bottoms down, so I had to quickly pull them back up before the man unstrapped me from the harness!!
This was a long but amazing day. We even made a few friends on this excursion which was lovely! But we were sad too as we knew this was our last excursion of the holiday.
All in all our experience in Mexico was amazing. All of the Mexicans we met were so lovely and friendly, the hotel was exactly what we wanted and we could not have asked for a better honeymoon! The days we stayed at the hotel we had free cocktails too (Bonus!) and sometimes we did get a bit… tipsy.. in the pool. We did have one embarrassingly drunk day in the pool but I’ll go into that another time..!
I hope you’ve enjoyed this travel themed post, and if you are travelling to Riviera Maya in Mexico soon, I’d highly recommend visiting the places we went to. It was definitely an experience we will never forget!
Have you ever been to Mexico? What did you love about it and what did you do? Let me know in the comments!
Hope you’re having a good evening!
Just Buttons